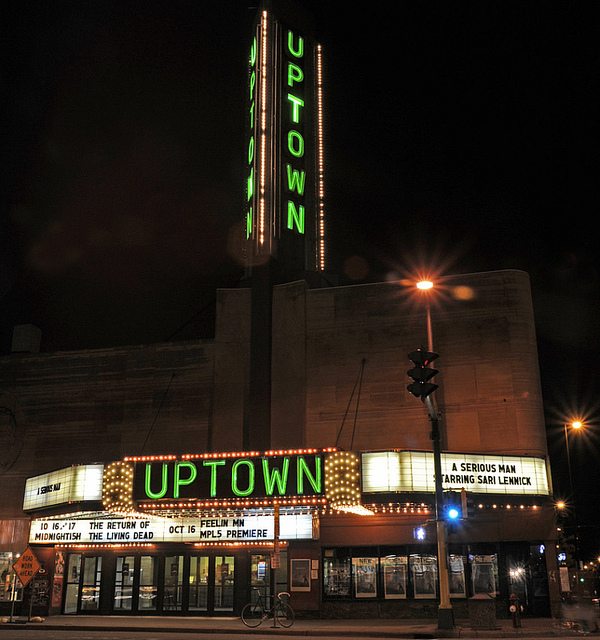 Uptown is a popular commercial district in southwestern Minneapolis, Minnesota, centered at the Uptown Theater (the former Lagoon) at the intersection of Hennepin Avenue and Lagoon Avenue. Uptown has proven to be a popular destination for those seeking retail, nightlife, and cultural events, and the district was famously written about by recording artist Prince.

The Lakes Area of Lake Calhoun, Lake Harriet and Lake of the Isles became popular in the 1880s as vacation cottages, hotels, and boating recreation became available by streetcar. As Minneapolis expanded south, housing construction boomed through the 1920s. A commercial district began forming just east of the Lakes Area. At the intersection of Hennepin Avenue and Lagoon Avenue, the Lagoon Theatre was built, a multi-function vaudeville theater. When the Lagoon burnt down in 1939, owners sought to rebuild and the business community took the opportunity to rebrand the area. Following the success of Chicago’s Uptown District, the Minneapolis Tribune announced the new Uptown District of Minneapolis centered on the newly renamed Uptown Theatre.

Uptown is a mix of various cultural strains and is considered an area to live and shop. Uptown’s more than 20 bars within a three-block radius draw people from across the metro area to revel in the district.

People visit and live in Uptown because it is an eclectic, vibrant, business, entertainment, and constantly changing area. Restaurants, large and small, thrive in Uptown, along with movie theaters, professional offices, retail stores, coffee shops are home to more than 30,000 residents, while many of them being in walking distance.